More than 160,000 people have died but from Mexico to Brazil, social networks are awash with quack cures and conspiracies.

For months Gustavo Andrade has been battling to convince his parishioners to take Covid-19 seriously. 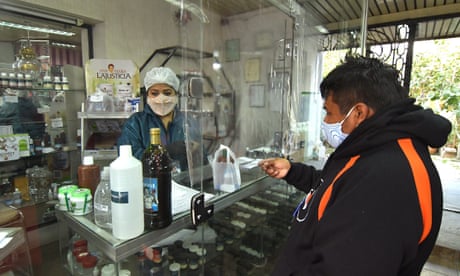 “This town is full of infected people. Two or three die every day,” said the priest, from the town of Venustiano Carranza in southern Mexico.

Yet for all Andrade’s efforts, many locals remain unconvinced. “Their understanding is that these deaths are from the poison the mayor is spraying as part of the anti-dengue fumigation,” he said.

The culprit for the confusion is fake news.

As Latin America battles the advance of Covid-19, which has now claimed more than 160,000 lives in the region, it is also fending off a tsunami of online disinformation designed to bamboozle and deceive.

From the Mexican state of Chiapas to Ceará in Brazil, social networks are awash with quack cures and fantastical conspiracies that can carry an all-too-real human cost.

The misinformation streaming through millions of Latin American mobile phones and computers ranges from the bizarre to the ridiculous. 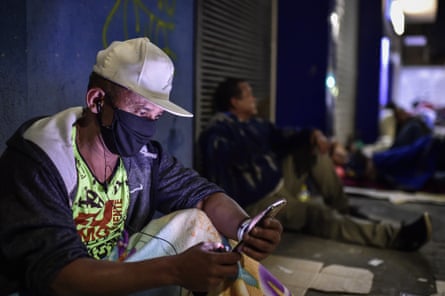 A man checks his phone outside a branch of Caixa Econômica Federal in Belo Horizonte. Photograph: Pedro Vilela/Getty Images

In recent weeks, there have been claims that Brazilian coffins were being filled with rocks to inflate the country’s Covid-19 death toll; that drones were being used to deliberately contaminate indigenous communities in Mexico; that the CIA was helping spread the coronavirus in Argentina; that seafood in northern Peru was not safe to eat because the corpses of Covid-19 victims were being dumped in the Pacific Ocean; and even that the World Health Organization chief, Tedros Adhanom Ghebreyesus, had been spotted boogying and boozing at a bar on the São Paulo coast.

Many of the false claims include miracle Covid-19 cures including Peruvian sea water, Venezuelan lemongrass and elderberry tea and supernatural seeds being hawked by one Brazilian televangelist.

In Bolivia, politicians have been promoting the use of a toxic bleaching agent as a potential cure – with panicked residents in the hard-hit city of Cochabamba reportedly lining up to buy the poisonous product.

“Some clearly represent political or commercial agendas, others are just absurd,” said Jorge Bruce, a Peruvian newspaper columnist and psychoanalyst who studies the phenomenon.

“The problem is these are spread around by well-intentioned people in family WhatsApp chats probably because they can create a sense of control over a situation which is out of control.”

Yasodora Córdova, a Brazilian expert in online misinformation, said the tight-knit social groups that define Latin American society were one reason the region was such a “fertile ground” for fake news.

Disseminators of online disinformation had taken advantage of such pre-existing communities – such as church groups – and used them as a powerful mechanism through which to spread their lies.

Some sought financial gain from their fabrications.

Córdova, who has spent a decade studying online conspiracy theories, recalled how during the Zika epidemic viral YouTube videos falsely claimed the illness could be cured with honey or garlic, as has happened again this year with the coronavirus. 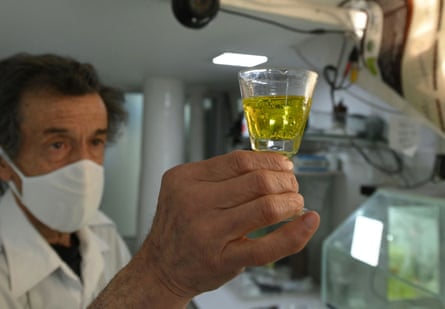 A Bolivian pharmacist with chlorine dioxide. At least 10 cases of chlorine dioxide poisoning have been reported in Bolivia in recent days. Photograph: Danilo Balderrama/Reuters

“Videos that promote this kind of ‘cure’ get thousands of views and the people who make them earn a lot of money,” said Córdova who said such producers could easily earn up to 7,000 reais (£1,050) per month. “It doesn’t matter if it’s true or not – what matters is the number of views.”

Others used falsehoods for political purposes. Córdova said that some far-right politicians in Brazil were engaged in a permanent “race to remain relevant” using bombastic and bizarre “news” to stay in the public consciousness.

“You need these fantastical-bordering-ridiculous [videos] for people to keep tuning in – either out of curiosity or because they genuinely believe in them.”

Whatever the motivation, the spread of fake news in a time of coronavirus has real-life consequences.

The misguided belief that 5G telecom towers spread the coronavirus via radio waves prompted villagers in Huancavelica in the Peruvian Andes to detain eight telecoms engineers for more than a day. Ginger consumption in Peru has rocketed and exports nearly tripled because of the belief it can treat or cure Covid-19. At least 10 cases of chlorine dioxide poisoning have been reported in Bolivia in recent days. 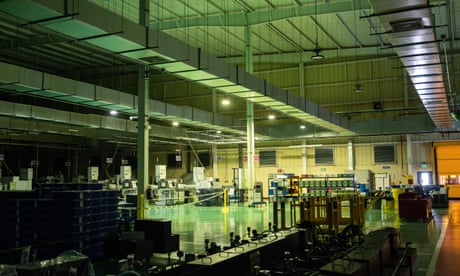 In Chiapas – where WhatsApp rumours have spread claiming government health workers were deliberately spraying indigenous communities with the coronavirus – there has been violence. An angry mob reportedly ransacked the community hospital in the municipality of Los Rosas in early June before torching an ambulance, the town hall and the mayor’s home.

In May, another group rampaged through Venustiano Carranza, looting an electronics store and torching the town hall along with the homes of the mayor and state governor’s mother. “The call came through social networks, trying to confuse people with the false argument that Covid-19 doesn’t exist and was created to affect poor people,” the Chiapas state government said at the time.

In Brazil, the president, Jair Bolsonaro, has been caught peddling disinformation – and been punished for doing so, with Facebook, Twitter and Instagram all deleting a video in which the far-right leader falsely claimed the malaria drug hydroxychloroquine had been “working everywhere” to treat Covid-19. 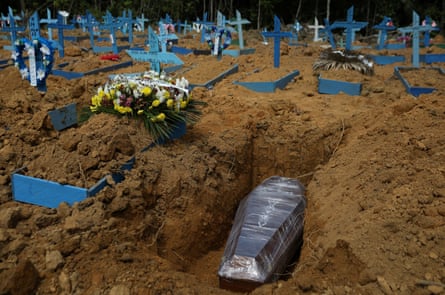 The Parque Taruma cemetery in Manaus. There have been unfounded claims that coffins were being filled with rocks to inflate Brazil’s Covid-19 death toll. Photograph: Bruno Kelly/Reuters

But Córdova said authorities and internet giants were not doing enough to deter the deceivers.

“The justice system needs to find a way to hold people responsible for the content they share – so they feel less comfortable distributing and sharing this kind of news,” she said.

“This will only stop when there is a counter-attack, when the justice system understands they must hold these people to account” by forcing those who alleged, for example, that Covid-19 was a Chinese experiment to prove such claims in court.

“As long as this doesn’t happen, people will keep believing the internet is a no-man’s land.”

The post about “Tsunami of fake news hurts Latin America's effort to fight coronavirus" first appeared on The Guardian website.