Global report gives Australia an A for coronavirus response, but a D on climate

The global Sustainable Development Report 2020, released this week in New York, ranks Australia third among OECD countries for the effectiveness of its response to the COVID-19 pandemic, beaten by only South Korea and Latvia.

Yet Australia trundled in at 37th in the world on its overall progress in achieving the United Nations’ Sustainable Development Goals, which cover a range of economic, social and environmental challenges – many of which will be crucial considerations as we recover from the pandemic. Australia’s worst results are in climate action and the environment, where we rate well below most other OECD countries.

South Korea tops the list of effective COVID-19 responses, whereas New Zealand (which declared the coronavirus eliminated on June 8, albeit with a few sporadic cases since) is ranked sixth. Meanwhile, the United States, United Kingdom and several other Western European countries rank at the bottom of the list. 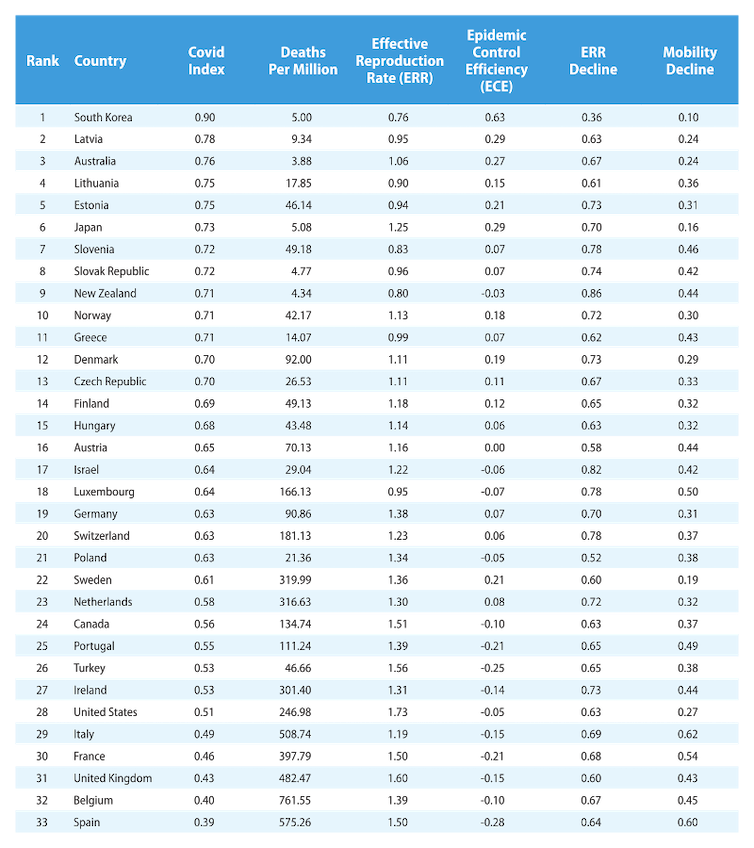 South Korea, Latvia and Australia did well because they not only kept infection and death rates low, but did so with less economic and social disruption than other nations. Rather than having to resort to severe lockdowns, they did this by testing and tracing, encouraging community behaviour change, and quarantining people arriving from overseas.

Using smartphone data from Google, the report shows that during the severe lockdown in Spain and Italy between March and May this year, mobility within the community – including visits to shops and work – declined by 62 per cent and 60 per cent respectively. This shows how much these countries were struggling to keep the virus at bay. In contrast, mobility declined by less than 25 per cent in Australia and by only 10 per cent in South Korea. 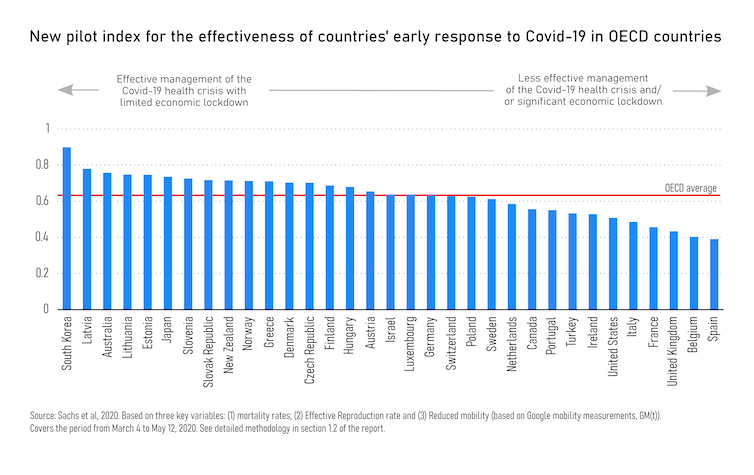 Why has Australia performed well?

There are several reasons why Australia’s COVID-19 response has been strong, although major challenges remain. National and state governments have followed expert scientific advice from early in the pandemic.

The creation of the National Cabinet fostered relatively harmonious decision-making between the Commonwealth and the states. Australia has a strong public health system and the Australian public has a history of successfully embracing behaviour change. We have shown admirable adaptability and innovation, for example in the radical expansion of telehealth.

We should learn from these successes. The Sustainable Development Goals provide a useful framework for planning to “build back better”.

The Sustainable Development Goals, agreed by all countries in 2015, encompass a set of 17 goals and 169 targets to be met by 2030. Among the central aims are economic prosperity, social inclusion, and environmental sustainability. They are arguably even more important than before in considering how best to shape our post-pandemic world.

As the report points out, the fallout from COVID-19 is likely to have a highly negative impact on achievement of many of the goals: increased poverty due to job losses (goal 1), disease, death and mental health risks (goal 3), disproportionate economic impacts on women and domestic violence (goal 5), loss of jobs and business closures (goal 8), growing inequality (goal 10), and reduction in use of public transport (goal 11). The impact on the environmental goals is still unclear: the short-term reduction in global greenhouse emissions is accompanied by pressure to reduce environmental safeguards in the name of economic recovery.

How do we ‘build back better’?

The SDGs already give us a roadmap, so really we just need to keep our sights set firmly on the targets agreed for 2030. Before COVID-19, the world was making progress towards achieving the goals. The percentage of people living in extreme poverty fell from 10 per cent in 2015 to 8.6 per cent in 2018. Access to basic transport infrastructure and broadband have been growing rapidly in most parts of the world.

Australia’s story is less positive, however. On a composite index of performance on 115 indicators covering all 17 goals, the report puts Australia 37th in the world, but well behind most of the countries to which we like to compare ourselves. Sweden, Denmark and Finland top the overall rankings, followed by France and Germany. New Zealand is 16th.

It is not surprising, in light of our performance during the pandemic, that Australia’s strongest performance is on goal 3: good health. The report rates Australia as on track to achieve all health targets.

Australia also performs strongly on education (goal 4), and moderately well on goals relating to water, economic growth, infrastructure and sustainable cities. However, we perform extremely poorly in energy (goal 7), climate change (goal 13) and responsible consumption and production (goal 12), where our reliance on fossil fuels and wasteful business practices puts us near the bottom of the field.

On clean energy (goal 7), the share of renewable energy in total primary energy supply (including electricity, transport and industry) is only 6.9 per cent. In Germany it is 14.1 per cent, and in Denmark an impressive 33.4 per cent.

Australia rates poorly on goal 12, responsible consumption and production, with 23.6 kg of electronic waste per person and high sulfur dioxide and nitrogen emissions. 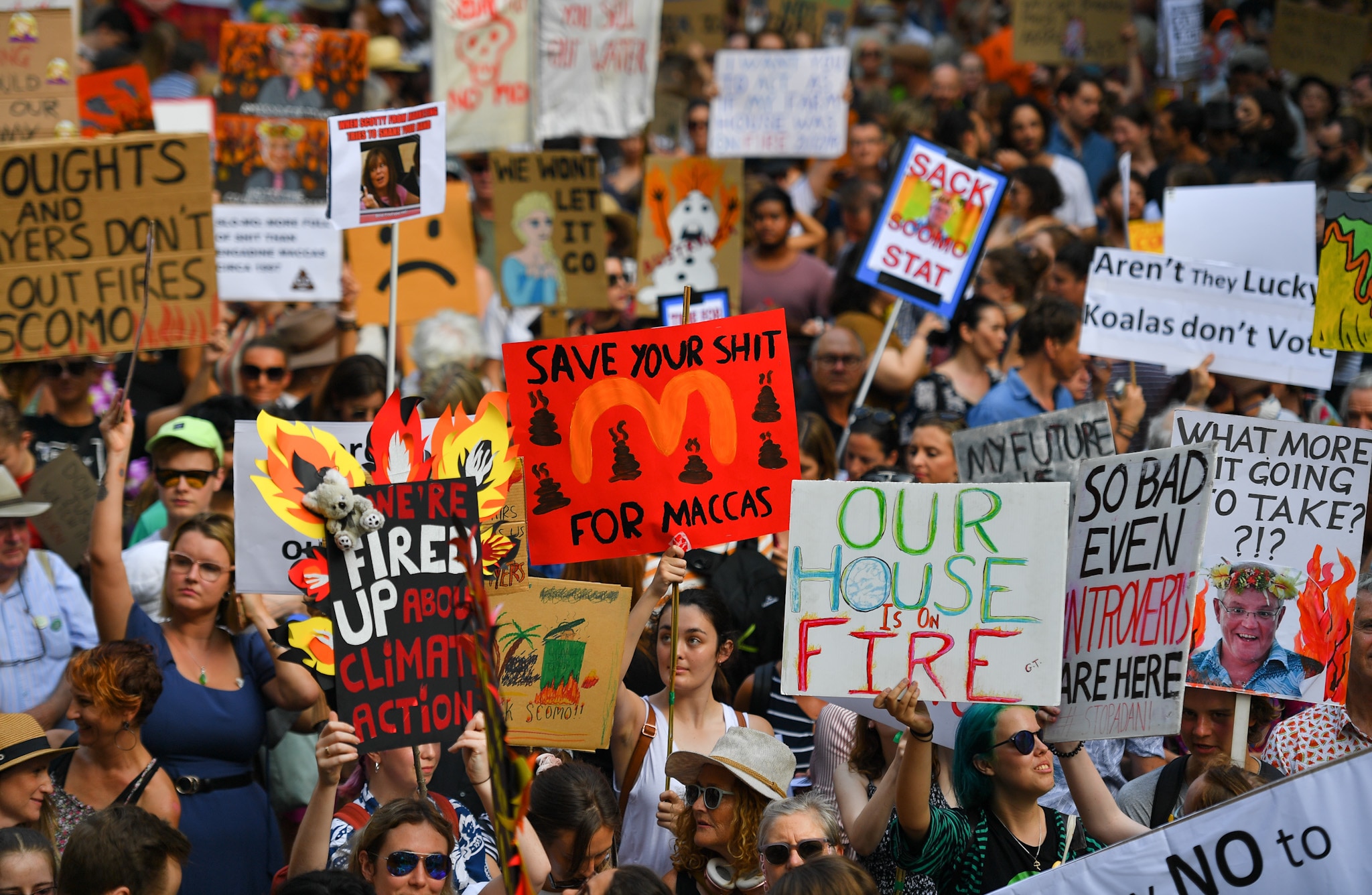 Australia’s performance on goal 13, climate action, is a clear fail. Our annual energy-related carbon dioxide emissions are 14.8 tonnes per person – much higher than the 5.5 tonnes for the average Brit, and 4.3 tonnes for the typical Swede.

And whereas in the Nordic countries the indicators for goal 15 — biodiversity and life on land — are generally improving, the Red List measuring species survival is getting worse in Australia.

There are many countries that consider themselves world leaders but now wish they had taken earlier and stronger action against COVID-19. Australia listened to the experts, took prompt action, and can hopefully look back on the pandemic with few regrets.

But on current form, there will be plenty to regret about our reluctance to follow scientific advice on climate change and environmental degradation, and our refusal to show anything like the necessary urgency.

The post about “Global report gives Australia an A for coronavirus response, but a D on climate" first appeared on the Reuters website.