A Black Lives Matter protest in Perth expected to attract thousands of people is set to go ahead on Saturday June 13 despite current COVID-19 restrictions limiting mass outdoor gatherings to 300 people.

The rally, which will be the second BLM protest in Perth within three weeks, prompted leaders to call on organisers to apply to the WA Police Commissioner Chris Dawson for an exemption to allow for the more than 300 people expected and stick to the social distancing rules.

Premier Mark McGowan on Sunday would not say he’d cancel the protest at Hyde Park that has attracted the interest of more than 19,000 people on Facebook for fear that banning it would attract even more people.

The recent BLM protest in Forrest Chase on WA Day attracted at least more than 1000 people, not all adhering to social distancing rules, to raise awareness of Indigenous Australian deaths in custody.

WA Aboriginal Affairs Minister Ben Wyatt said although the issue had “bedevilled” Australia for a long time, he did not want to see a large gathering of people, especially when some of the WA’s most vulnerable people would be encouraged to attend.

Mr Wyatt said WA had done more than most states to protect its at-risk Aboriginal communities and so to have a mass gathering where members of those communities would be attending could jeopardise that.

“It worries me greatly that there might be a large gathering of Aboriginal people, quite rightly because no one is disputing the topic of the protest, but a lot of Aboriginal people may be encouraged to come from regional Western Australia to the city to participate,” he said.

“We’re not in a police state, we can’t have a police officer on every corner, it’s really up to Western Australians to make these decisions in their own interests and health.”

Mr Wyatt said this year’s Anzac Day commemorations during the pandemic proved that mass gatherings weren’t necessary to come together in unity. 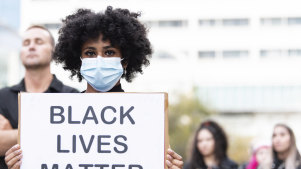 “We have seen that we can protest or make a point in ways that still protect us, Anzac Day highlighted the fact that we can make points and political points, or celebrate or commemorate (in ways other than gathering en masse),” he said.

Mr McGowan said he understood why people wished to protest but urged organisers and attendees to follow the rules.

“The more someone like me tries to stop the rally, the more likely it will go ahead and be bigger,” he said.

“If the organisers want to apply for the exemption they can but that doesn’t mean that they’ll get it.

It comes after Finance Minister Mathias Cormann on Sunday said the tens of thousands who protested in the eastern states against Indigenous Australian deaths in custody selfishly risked a second coronavirus outbreak.

“We fully respect the right to protest but right now many many Australians have lost their jobs as we impose restrictions on the economy in order to save lives in order to suppress the spread of the virus,” he said. 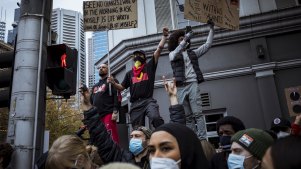 Mr Cormann said there was a “double standard” when it came to mass gatherings that were able to go ahead while not adhering to rules and regulations when so many had made sacrifices throughout the pandemic to stop the spread of the virus.

“This is not about the subject matter at hand, the issue of course is a very legitimate issue and I understand the depth of feeling but if we’re going to impose restrictions across the country to the point where people are prevented from attending the funeral of their parents or their loved ones then surely we should have some consistency here,” he said.

“All around the world, and Western Australia, people have made significant sacrifices, many people have lost their jobs in order to suppress the spread of this deadly virus, there has to be some consistency here, there are other ways to express the legitimate strength of feeling in relation to these issues and the rules that apply to everyone else should apply to everyone across the board.

“There should not be any mass gatherings like we’ve seen anywhere, including in Western Australia.”

The Hyde Park protest, advertised on Facebook, is to “raise awareness toward the 432 deaths of Indigenous Australians in police custody”.

“We are banding together to unite in amplifying the voice of the First Nations People,” the event page read.

“We want to prevent the death's of incarcerated Indigenous Australians in the future. We want the recommendations from the 1987 Royal Commission into Aboriginal Deaths in Custody implemented. This glaring injustice has gone on far too long.”

According to the organisers, the safety of people attending the “peaceful protest” is of the utmost importance and included consideration toward the COVID-19 pandemic.

“Although the threat has become subdued ensure that you take the measures you can in keeping yourself and others healthy,” the event page read.

“Where possible adhere to social distancing, use hand sanitiser, and the use of face masks is recommended and encouraged.”

The post about “Perth's Black Lives Matter rally set to go ahead against COVID-19 rules" first appeared on the WA Today website.

Argentina moves to nationalise one of world’s biggest soy suppliers