Peru Locked Down Hard and Early. Why Is Its Coronavirus Outbreak So Bad?

ost countries that have seen their COVID-19 cases explode in the last month—Sweden, the U.K. and the U.S.—have received fierce criticism from epidemiologists for their resistance to the tough social distancing measures necessary to stem the spread of the new coronavirus. For Peru, which now has the world’s second-highest per capita rate of new infections per day it’s a different story.

Peruvian president Martín Vizcarra declared a national state of emergency on March 15, when the country had just 71 confirmed cases of COVID-19. The order closed Peru’s borders and banned Peruvians from leaving the house except to access essential goods or perform essential work. It was one of the earliest quarantines in Latin America, and came in before lockdown orders in France, the U.K., and other European countries that were at the time far ahead of Peru in their contagion curves.

But it hasn’t worked as hoped. By May 28, Peru had nearly 142,000 cases of COVID-19 and 4,099 coronavirus-related deaths. It’s the third highest toll in Latin America, a region which has become the new epicenter of the pandemic in recent weeks, led by its two largest countries, Brazil and Mexico.

Speaking on May 23 as he extended most quarantine measures until the end of June, Vizcarra said that Peruvians needed to do more to keep to follow the rules of lockdown and avoid “individualistic” and “selfish” behavior.

But public health experts say living and working conditions in the country of 33 million—where a fifth of people live on only around $100 a month—has made it near impossible for many Peruvians to comply with quarantine measures. Meanwhile, some government measures have backfired, inadvertently leading to bigger gatherings of people. Here’s what to know about how COVID-19 spread in Peru, despite quarantine measures.

How did the coronavirus spread so much during Peru’s quarantine?

The virus has been spreading fast in Peru ever since the country confirmed its first case on March 6. The country surpassed 1,000 cases 25 days later, and 10,000 cases two weeks after that, on April 14, according to Reuters. Some 70% of cases are concentrated in Lima, the sprawling coastal capital which is home to a third of the population. Iquitos, in the Peruvian Amazon, the world’s largest city that cannot be reached by road, has also been hit hard.

The problem is that for many in the South American country, life is still structured in a way that makes it difficult for many people to avoid close contact with others, says Ivan Hidalgo Romero, academic director at the Institute of Government and Public Management in Lima. “The government’s [quarantine] strategy works for the 30% of Peru that is employed in the formal sector, that’s been growing economically,” he says. “But there’s another 70% of Peru, which is informal, that doesn’t have access to basic services of health, education, nutrition, or to pensions and financial safety nets.”

Staying home for long periods of time is impossible for the 44% of households that do not have a refrigerator, according to a 2018 government survey, with families needing to leave the house regularly to access food. As a result, busy food markets have become a hub of infection. In late April, when authorities shut down one of Lima’s more than 1,200 food markets and performed rapid discard tests on traders, 163 of 842 came back positive. 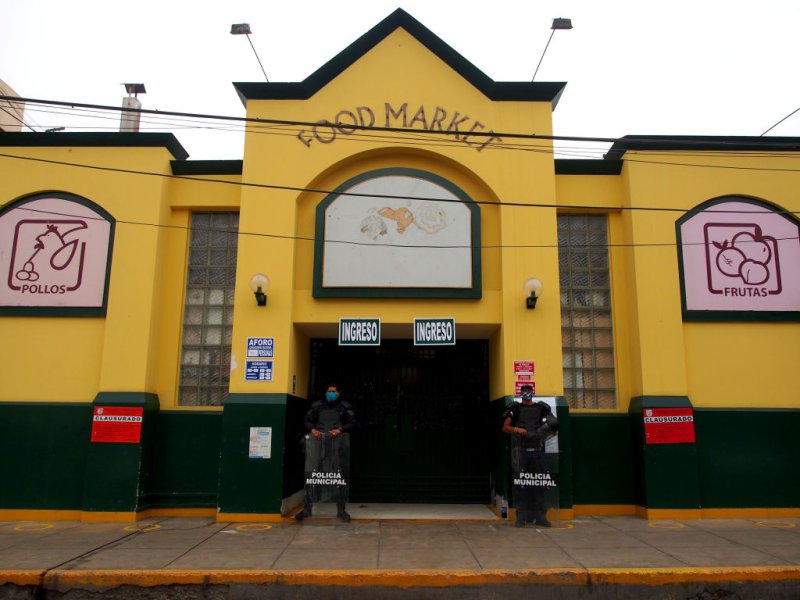 Municipal police guard the doors of a food market closed for sanitary measures, due to Covid-19, in a neighborhood of the Lima on May 27.

Forgoing several months work is even harder for Peruvians than it has been for people in wealthier countries like Italy, China and the U.S., which have shuttered their economies. More than 70% of Peruvians work for cash in the informal sector, with little job security and no possibility of sick pay. Working from home is impossible for the vast majority. Around 43% of the workforce is employed in agriculture or heavy industry, while construction and tourism make up the large bulk of the services sector. Less than a third of households have a computer.

“We’re seeing the measures designed in the capital colliding with the reality of the country,” Hidalgo says.

The government has given poorer families grants of around $220 each to help them weather the crisis—part of a massive economic response package that will cost 12% of Peru’s GDP. But critics say the distribution of that aid has contributed to spreading the virus. Most poorer Peruvians don’t have bank accounts, so recipients have needed to go to banks in person to collect their money. “This generated queues at the banks since dawn, without any respect for physical distancing,” Nora Espiritu, a doctor and health researcher wrote in The BMJ, a British medical journal,

How is Peru’s healthcare system coping with COVID-19?

It’s struggling. Ernesto Gozzer, a former director of Peru’s National health Institute a professor of Global Health at Cayetano Peruvian University, says the system is reeling from “at least 30 years” of underinvestment. “We started in this outbreak with a system that wasn’t prepared. That’s why the government tried to rapidly implement this bold quarantine order, even though it’s not an easy thing to do in Peru.”

Gozzer says the government has moved fast to boost capacity in the healthcare system. “Before February we had only around 100 ICU beds in the country. In March that doubled to 200. And now we have 1,000.” The government says they will double that number again, to 2,000, over the next month.

Health minister Victor Zamora Mesía has been blunt about the challenge facing his country. In an interview with La Republica newspaper, he compared Peru to Spain, a comparatively wealthy nation, about 1.5 times the population of Peru, that saw overcrowding in hospitals despite starting with roughly 8,000 ICU beds. “If Spain was overwhelmed, imagine the effort we’ve got to make here.”

Nationwide ICU beds with ventilators in Peru’s hospitals are 85% full, according to the government. But with health care facilities unevenly distributed, some parts of the country, like the northern Amazon region of San Martin, have just a few beds left or have run out altogether. In mid-May, the president of Peru’s Society of Intensive Care Medicine said that ICUs in Lima were no longer admitting older patients, instead taking in younger ones who had a higher chance of survival. (Other health officials later said that decisions were made on a case by case basis and not on age alone). In some places—like isolated Iquitos—a shortage of basic medicines has led to price speculation in pharmacies. “We are at our limit,” Gozzer says. 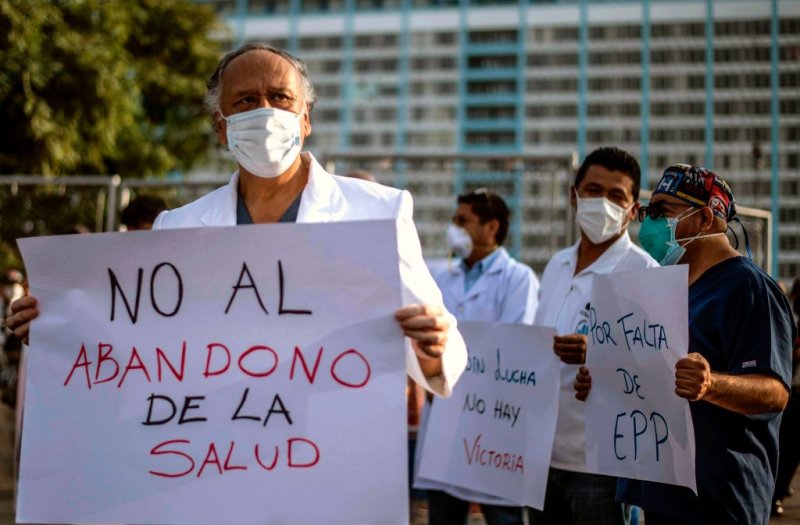 Health workers protest for the lack of security equipment demanding the resignation of Peruvian Health Minister Victor Zamora with a sign reading No to the abandonment of healthcare outside the Edgardo Rebagliati public hospital in Lima on May 13, 2020.

How is the government responding to the increasing infections?

Police have been cracking down on people breaking quarantine rules, but working without personal protective equipment (PPE), thousands of officers have fallen sick themselves. Going forward, the priority for security forces will be enforcing health protocols at food markets, President Vizcarra said May 22. He also announced an extension of quarantine measures until June 30. But certain businesses, including salons and food delivery services are now allowed to reopen.

Zamora Mesía, the health minister, has been clear that the economy is also a major consideration in easing quarantine measures. According to a national telephone survey, 30% of Peruvians have lost their jobs since the lockdown began. “The impact on employment and the increase in poverty and extreme poverty translate into hunger, which also affects health,” he told La Republica. “We have to restore a balance at some point, and this is the first step: we begin to cautiously move the economy, in a way that doesn’t inflict a blow on what we’ve gained in health.”

How is the rest of Latin America coping with the coronavirus?

COVID-19 was slower to spread in Latin America than in Asia, Europe and the U.S. But this month has seen a spike of cases across the region, and as of May 28 the region accounted for 40% of daily deaths from the disease. It’s an alarming figure for a region with high rates of inequality and poverty, underfunded health systems, and highly urbanized populations.

Latin American governments have mounted drastically different responses to the pandemic. Leaders in some countries, like Mexico and Brazil, have resisted efforts to shut down the economy and performed very few tests for the virus. Other countries, from relatively well-off Chile to poorer Honduras, have implemented strict lockdowns. But even with such responses, analysts say limits on state aid and large informal economies have made it harder for Latin Americans to abide by quarantine orders, as in Peru.

Hidalgo says the next few months may bring a moment of reckoning for the region’s governments. Many Latin American countries have experienced rapid economic growth over the last two decades, but some have failed to channel that prosperity into strengthening the social safety nets and health systems that are now proving crucial to keeping COVID-19 at bay. “The pandemic is going to reveal how much governments have really invested in creating infrastructure for the poor and for the general population,” he says. “Every country will see their reality laid bare.”

The post about “Peru Locked Down Hard and Early. Why Is Its Coronavirus Outbreak So Bad?" first appeared on the Time website.

Why Brazil’s President Wants to Reopen the Economy, Despite Rising Death Toll