As the pandemic cancels flights, Uruguay turns its airport into a drive-in

With commercial flights cancelled around much of the world because of the coronavirus pandemic, one country has adapted its main airport to a new use: as a drive-in cinema.

Instead of planes flying in and out of Uruguay’s Carrasco international airport, cars are now arriving nightly for Uruguayans to enjoy a socially distanced movie in the safety of their own vehicle.

“It was fantastic,” said dentist Cecilia Muttoni who recently went to a screening of Sonic the Hedgehog with her 29-year-old daughter. “It was the chance to have a communal experience but with each car being its own private universe.” 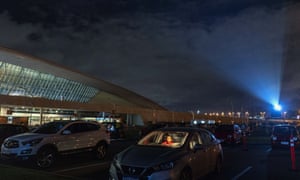 The Carrasco international airport, on the outskirts of Montevideo, Uruguay, has been converted into a drive-in cinema. Photograph: Matilde Campodonico/AP

Uruguay closed all entertainment venues, including cinemas, when it went into lockdown on 13 March. The country also closed its borders for all air traffic except chartered repatriation flights.

But now, Carrasco airport, located outside Uruguay’s capital city of Montevideo, is showing movies every day.

“As a doctor, I’ve been moving around more, but for my daughter, who works at home, it was a great opportunity to go out safely,” said Muttoni.

Among the movies being screened are Bohemian Rhapsody, The Lion King and Joker, among others, for around 100 cars each showing. The movies are projected on a giant 20-metre-high screen and the audio is piped into cars over a dedicated radio channel.

“We are trying for people to stay in their cars as much as possible,” said airport official Mauricio Carluccio.

Special consideration is shown, however, for the enthusiasm of children – some of whom, in their first outing in over two months, have stepped out of the car, as long as they don’t wander far off.

Popcorn and McDonald’s can be ordered via WhatsApp. “You place your order, pay it with a credit or debit card to avoid additional contact and they bring it to your car wearing face masks,” said Muttoni.

Airport toilets have been opened for movie-goers, who must wear face masks outside their cars. The toilet facilities are constantly disinfected and emergency mechanics are on standby in case of a vehicle breakdown.

The promoters behind the project are planning on putting on music shows and standup comedy as well for the drive-in audience.

Uruguay has so far had one of the lowest coronavirus tolls in Latin America, even as the region emerges as a hotspot for the pandemic. The tiny country of just 3.5 million people has had 803 confirmed cases of coronavirus and only 22 deaths so far.

In contrast, neighbouring Brazil has had the second-most cases in the world after the USA, with about 412,000 cases and nearly 26,000 deaths.

Uruguay reacted fast to its first cases in March, with a voluntary quarantine, widespread monitoring and tracking plus randomized tests. The government is still encouraging people to self-quarantine as it gradually starts to reopen but isolation is mandatory only for senior citizens.

News is under threat …

… just when we need it the most. The Guardian’s honest, authoritative, fact-based reporting has never mattered more. As we face the biggest challenge of our lifetimes, we’ll remain with you, so we can all better understand the crisis. But at this crucial moment, news organisations are facing an existential threat. With advertising revenues plummeting, we risk losing a major source of our funding. More than ever before, we need your support to help fill the gap.

Our journalism improves lives and holds power to account, and your support makes that journalism possible. The Guardian's chief mission is authoritative reporting that exposes wrongdoing and incompetence, and demands better. We have a long tradition of this kind of work and are committed to continuing it. Every penny you give is an investment in a better world.

You’ve read in the last six months. We believe everyone deserves to read quality news and measured explanation, in times of crisis and beyond. That’s why we keep our journalism free from a paywall and open to everyone – something enabled only by reader support. You’re now visiting in your millions, and supporting us from 180 countries around the world.

We have upheld our editorial independence in the face of the disintegration of traditional media. Free from commercial ownership and political bias, our journalism is never influenced by billionaire owners or shareholders. Our agenda and opinions are our own, and this makes us different. It means we can challenge the powerful without fear – investigating, disentangling and interrogating.

The post about “As the pandemic cancels flights, Uruguay turns its airport into a drive-in" first appeared on The Guardian website.

Scientists say COVID-19 will be endemic in Cuba; a fresh outbreak of the disease is expected in November