Lockdown measures put in place across Latin America to limit the spread of the coronavirus pandemic have repressed civil liberties and violated human rights, a rights group said on Friday.

Amnesty International said it has verified nearly 60 incidents in the region over the past seven weeks that show governments using arbitrary, punitive and repressive tactics to enforce quarantine orders.

"The footage we have verified from across the Americas since late March provides worrying indications that governments are reverting to the kinds of repression we documented in 2019 and earlier, but this time to enforce pandemic-related public health measures," said Erika Guevara-Rosas, Americas director at Amnesty International.

Starting in March, many countries in Latin America declared states of emergency, imposed curfews and implemented lockdown measures in an effort to stem the spread of COVID-19. While restrictions have varied, some countries resorted to coercion to enforce the restrictions, including the use of detention.

In Venezuela, even before the pandemic, the United Nations called the country the site of one of the world's 10 worst humanitarian crises in 2019, noting that 9.3 million of the 30 million population consume insufficient quantities of food. Some five million people have fled as a result.

Though numbers of reported deaths and cases from the virus appear modest, Venezuelans are suffering from the economic shutdown and delays in the state food distribution programme known as CLAP. During April, some 150 protests erupted across the country to demand food, and 464 called for access to basic services including electricity, water and gas.

Amnesty says there have been indications of excessive and unnecessary use of force to disperse the protests, consistent with a widespread policy of repression used to silence dissent since at least 2017. Venezuelan officials have described the protests as "riots".

In Argentina, Amnesty International verified a video in which the police beat a homeless person for apparently being in the street during the lockdown.

Amnesty also points to the Dominican Republic, which has detained 27,000 people between April 8 and May 7, according to police reports cited by the rights group, for allegedly non-compliance with the evening curfew. 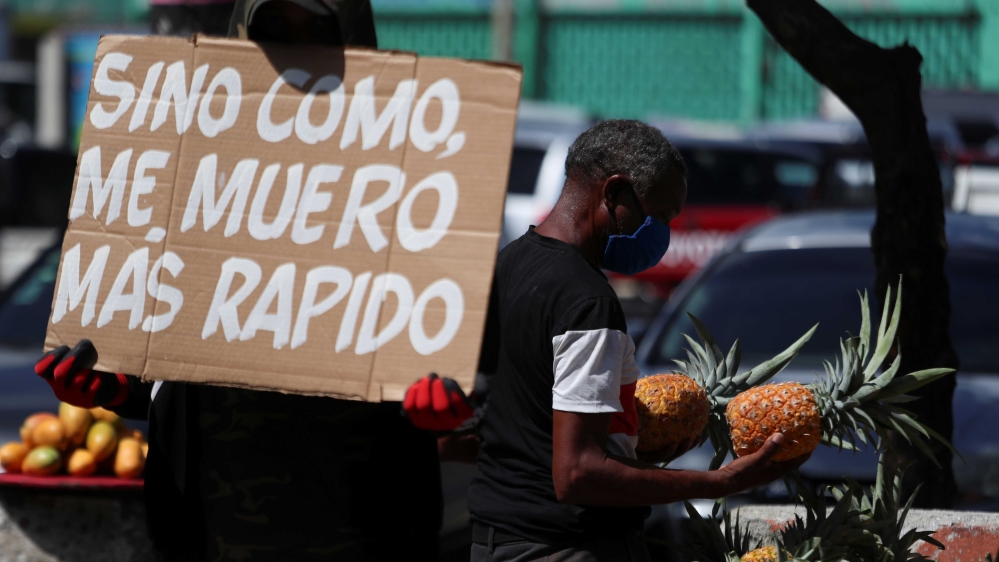 A man holding up a sign reading 'If I don't eat, I die faster' in front of the central market as he protests against the measures taken by the government during the outbreak of the coronavirus disease, in Santo Domingo, the Dominican Republic [Ricardo Rojas/Reuters]

Amnesty said it has verified videos from Puerto Rico, Mexico and the Dominican Republic in which police appeared to stop or detain individuals who were on their way to get food or supplies.

In Honduras, Amnesty cited a local nongovernmental organisation, ACI Participa, which documented 106 peaceful demonstrations of people demanding food, medicine and water from local and national authorities in April. According to the organisation, security forces repressed many of the protests - including through the use of tear gas and firearms against peaceful protesters.

Most governments have said the lockdown measures are needed to stem the spread of the disease, particularly in countries where health systems are not equipped to handle a widespread outbreak.

Amnesty warned that such measures are not only serious violations of human rights, but will also ultimately be ineffective in containing the spread of the disease.

"While COVID-19 affects us all, it does not affect us all in the same way. Many of those who face repression in the Americas are marginalised people who need access to food, healthcare and other necessities, not criminalisation and ill-treatment. Governments are mistaken if they think repressive measures will protect people from the disease," said Guevara-Rosas.

How to Form an NGO in Uruguay

More than one million Australians tested for coronavirus, but authorities warn pandemic isn't over